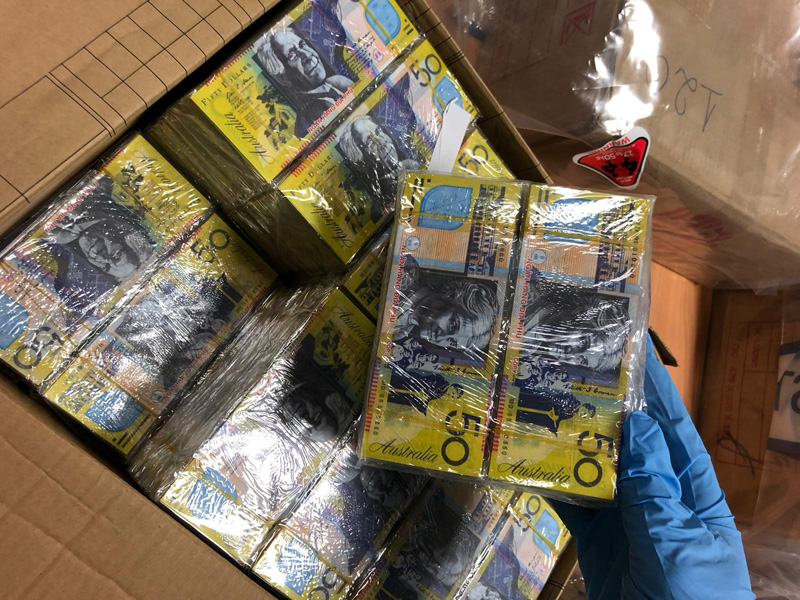 RETAILERS have been urged to be vigilant about ‘fake cash’ which may be in circulation leading up to the Chinese New Year celebrations.
The warning from Australian Federal Police (AFP) follows an increase in the importation of what is referred to as ‘joss paper’ and Chinese Training Notes, printed to resemble Australian banknotes.
Used in Hell Bank Money ceremonies and Chinese New Year festivities, AFP detective superintendent Jayne Crossling said a number of shipments of joss paper with a face value of more than $17.3 million had been seized by both state and federal authorities since 2014.
“The differences between imitation notes used in these celebrations and Australian currency may appear obvious to most, however we’ve seen over $500,000 (face value) of joss paper, which appears to replicate Australian currency, passed through an assortment of retailers, licensed venues and family run businesses over this same period,” she said.
“We are reminding the public to be aware of the security features that are present on all genuine Australian banknotes and help to determine if it is real currency. Australian currency is also made from more durable materials, specifically polymer, compared to paper based currencies that these fake notes usually consist of.
“If a member of the public believes they have been victim of such offences, we encourage them to report it to local or federal authorities.”

Fake medical certificates in jail
A GUARD at Silverwater Jail appeared in court on Thursday to face charges that she allegedly used fake medical certificates to support sick leave entitlements.
On December 9, the 53-year-old woman was served with a Future Court Attendance Notice for two counts of use false document to obtain financial advantage.
Detectives from the Corrective Services Investigation Unit launched an investigation following reports a female corrections officer was submitting fraudulent doctors’ certificates while working at the prison.

Arrest over stolen credit cards
POLICE searched homes at Granville and Constitution Hill last Tuesday as part of an investigation into the alleged use of stolen credit cards to make nearly $20,000 in purchases.
On Saturday, January 11, officers from Burwood Police Area Command stopped a Toyota Yaris outside Strathfield Railway Station and spoke with the 34-year-old driver and a 26-year old passenger.
During a search of the car, police allegedly found a large amount of mail, mobile phones and a small quantity of prohibited drugs.
Both men were arrested but later released pending further inquiries.
Following an investigation, police identified a number of alleged fraudulent transactions conducted across the South West and North West Metropolitan regions and on Tuesday, January 21, they searched a home on Clyde Street at Granville.
Officers allegedly located prohibited drugs and items believed to be proceeds of crime at the home and arrested a 34-year-old man.
He was charged with two counts of deal with identity information to commit indictable offence, 10 counts of dishonestly obtain property by deception, two counts of possess prohibited drug, goods in personal custody suspected being stolen (not motor vehicle) and possess/attempt to, prescribed restricted substance.
A short time later during a search of a home on Tabooba Street at Constitution Hill they allegedly also located items believed to be proceeds of crime, and a 26-year-old man was charged with 10 counts of dishonestly obtain financial advantage etc by deception and goods suspected stolen in/on premises (not motor vehicle).

Fled from armed holdup on bike
A 24-YEAR-OLD South Granville man arrested after a short foot chase last Tuesday afternoon has been charged in relation to an alleged armed robbery at a Seven Hills fast food restaurant earlier in the week.
Police were called to the restaurant on Best Road on Saturday, January 18, after a report that a man riding a pushbike and allegedly armed with a rubber mallet jumped on the counter and demanded the staff open the registers just before 3pm.
After placing cash in a plastic bag, he fled the scene on the bike.
Officers from Blacktown Police Area Command launched an investigation into the robbery and on Tuesday they searched a unit on Bennett Street, seizing a number of mobile phones and items of clothing.
The man was arrested in the vicinity of the unit after allegedly attempting to run from police and has been charged with robbery armed with offensive weapon.
Police thanked the public and the media for their assistance in the case.