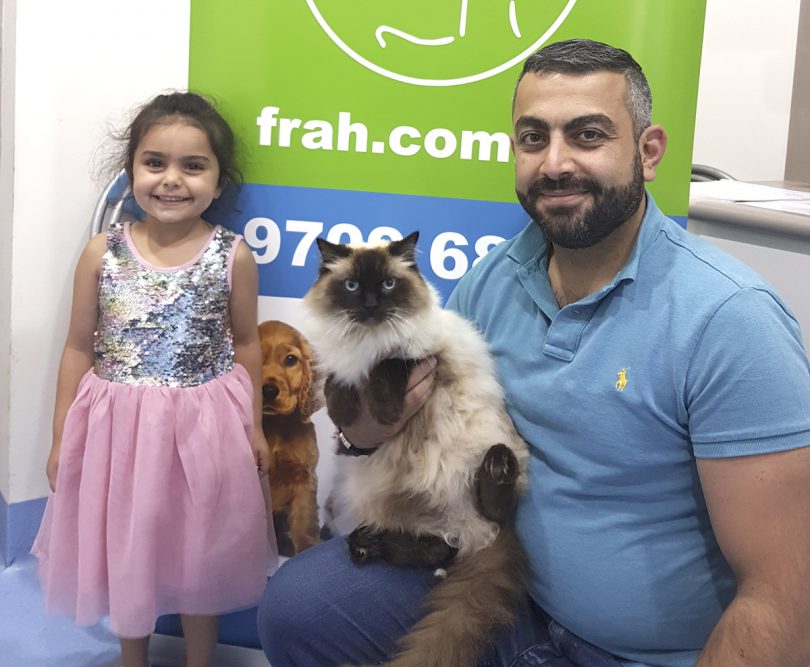 ☐ ‘Leo’ after being reunited with his family, Abbass and Mariana, 4.

AFTER being missing for two-and-a-half years, Georges Hall family Abbass, Randa and little Mariana, 4, despaired they would never again see their beloved Ragdoll cat, Leo.
But they got the best start to the New Year ever after a call from the Fairford Road Animal Hospital, advised them that a ‘stray’ puss had been bought in matching Leo’s micro-chipping details.
“We simple could not believe it,” an overjoyed Randa explained.
“We were on holidays and the week before Mariana was explaining to an aunty that she still missed Leo, who we had before she was born, and then to get the phone call a few days later, was like a miracle.”
Randa said she had even picked up off the street Leo’s double about 12 months previously.
“We thought it was Leo, though he looked a bit different, but when we took him into the vet the next day, the micro-chip details were for another cat; I was devastated, it was so heart-breaking.
“I suppose the moral of this story is to make sure you get your pet micro-chipped and that way, there’s always a chance you’ll get him or her back.”
Fairford Road Dental Hospital Head Nurse Helen Williams couldn’t agree more: “We can’t stress enough the importance of micro-chipping.
“It still amazes me just how many pets are not micro-chipped despite it being legislated ‘compulsory’ under the NSW Companion Animal Act about 15 years ago,” she said.
“Leo’s story had a happy ending but not every family or pet is as lucky.”