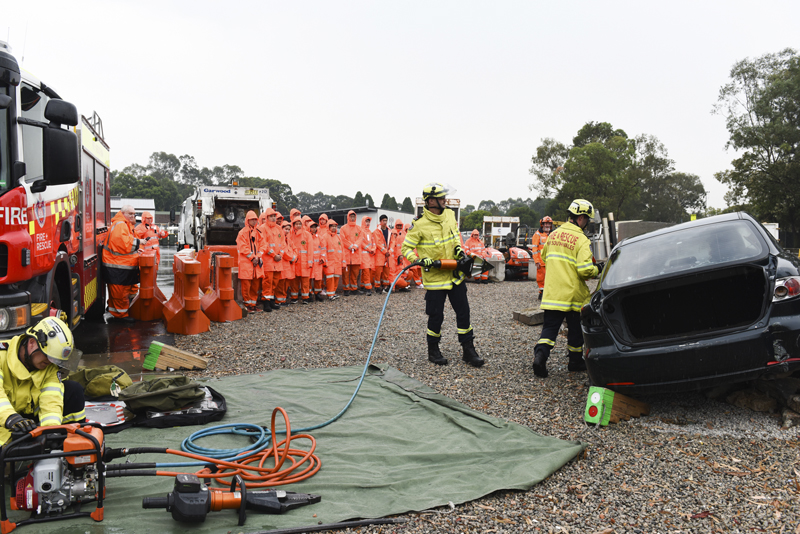 The Auburn SES unit is running a 5 day cadet program during school holidays.

INSTEAD of hanging out with their friends one group of teenagers spent the past week getting hands-on experience in leadership, teamwork, communication and safety.

Aged between 15 and 18, the 22 teens took part in a five-day NSW State Emergency Service (SES) cadet program at the Auburn SES headquarters which included talks from firefighters, police officers and navy personnel as well as SES volunteers.
Aiming to become a firefighter or join the defence forces, 18-year-old Julie Tran from Bankstown says she enjoyed every part of the cadet program, particularly working as part of a team.
“Working with public safety is my passion,” she said.
“I loved the focus on leadership skills and working alongside everyone.”
Seventeen-year-old Anthony Pham from Bonnyrigg is hoping to become a police officer and says the SES cadet program gave the cadets a “taste for the emergency services”.
“I really enjoyed the program and getting to meet all the different people in the services and finding out about it,” he said.
“I liked everything, to be honest.”
NSW SES Central Cluster local commander Kathy Garanski said it was the second year they’d run the cadet course at Auburn and it had been another success.
“Firefighters from Chester Hill Fire and Rescue’s hazmat crew were here on Thursday and cadets got to try on all the gear including the oxygen tanks,” she said.
“Bankstown firefighters who specialise in road crash rescue also demonstrated how they cut apart a car to rescue some of the cadets acting as ‘victims’.
“The cadets also watched a very confronting video featuring a young man who lost his legs after a car accident. It definitely gave things a different twist.”