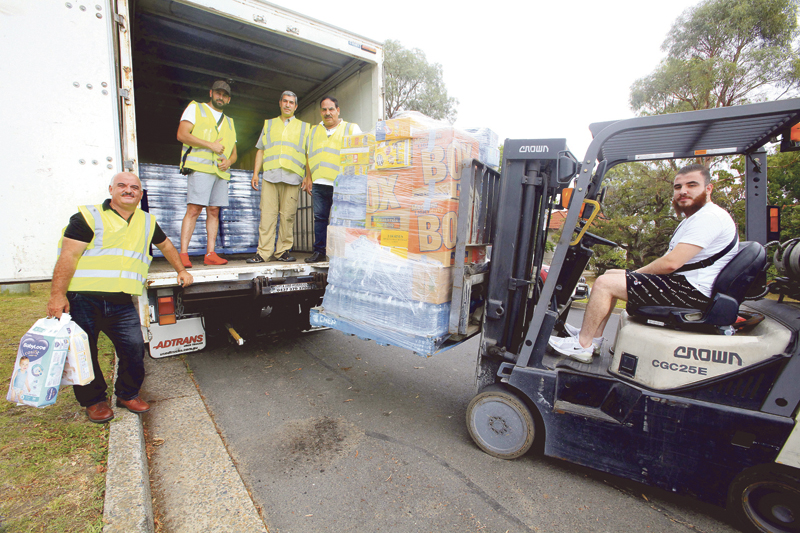 DONATIONS collected in Bankstown by two separate community groups have already made their way to those impacted by the State’s devastating bushfires.

Khaled El-kordi and Mohammed Ghamrawi from Sydney Islamic Community Welfare, put out a call for non-perishable food and bottled water on social media on Sunday, January 4 and within three days, they had collected more than 32 pallets of goods to send south to the Eurobodalla Shire.
The Batemans Bay State Emergency Service (SES) unit in the Shire lost their unit headquarters to the blazes on New Year’s Eve, and Mr El-kordi, who is also an SES volunteer, said they felt they had to do something to help the countless bushfire victims.
“They need help and we have to do something,” he said.
“We already have another semi-trailer of water on standby and we are just working out where it is most needed.”
Last month, volunteers from Bankstown’s Fiji Indian Community through Yaadein Vision Australia (YVA), also purchased and pre-packed 150 food hampers including Christmas cakes for firefighters and fire victims, along with 500 p2 type breathing masks.
International YVA director Bobby Mishra said that on December 28, YVA members drove out to Rural Fire Service (RFS) stations in Picton, Balmoral and Hilltop to deliver the food hampers, along with a $1,000 donation.
However the message from authorities is for people to hold off on sending goods for the moment as the influx is causing its own logistical issues.
During a visit last week to the South Coast, Governor General David Hurley said the best way people could help was to support businesses in affected areas and to visit when it was safe to do so to help communities recover and rebuild.