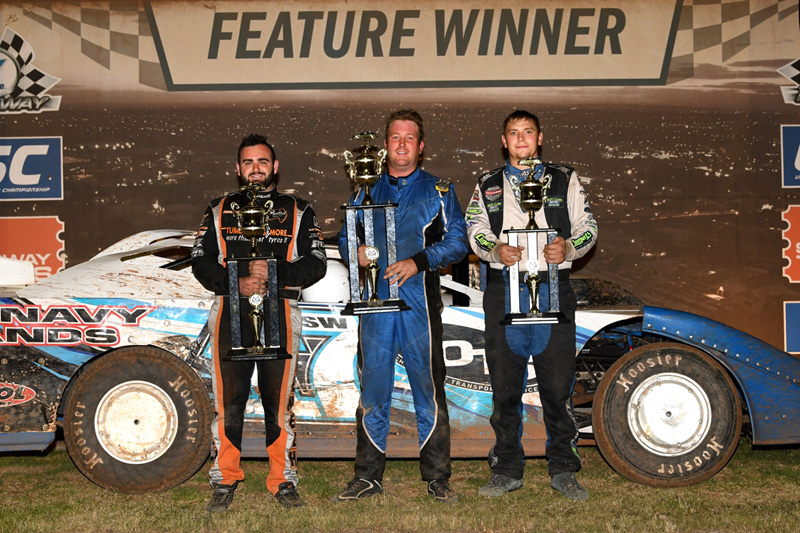 On triple title night each A-Main was a belter as the Ultimate Sydney Speedweek juggernaut rolled into the halfway mark at Sydney’s Valvoline Raceway.
Farr claimed his career third NSW Sprintcar title whilst for Raymont and Onley it was a career breakthrough moment for the pair of them at the iconic Sydney venue.
Farr set a quick time, won his heat, won the Pole Shuffle and then survived several determined attempts to take his lead away over the 35-lap distance after starting on the front row with Jamie Veal.
Texan Aaron Reutzel, Californian Brad Sweet, Marcus Dumesny and Veal all had their attempts to wrestle the points from Farr but the biggest surprise came from Jackson Delamont.
Though he would finish fourth eventually, Delamont was a legitimate chance for victory as he ripped around the kerb line to dispose of several heavy hitters including Reutzel, Sweet and Veal as he set off after Farr.
Veal came after Farr late in the race several times but came up agonisingly short to record his third consecutive second place finish in as many rounds.
Delamont came from 10th on the grid to place fourth whilst Brad Sweet pedalled to third after starting on the outside third row.
Marcus Dumesny was again consistent finishing sixth but the talented third generation racer was as high as second place at one point early.
Defending NSW champion Lynton Jeffrey came from 13th position to score seventh.
Mick Saller came from 22nd to a stirring ninth place finish in one of his best results to date.
Late Model NSW Champion, Onley was sporting a grin after he swept to victory with a faultless drive to win his first ‘big one’ over a crack field in the 30-lap feature race, while Queenslander Raymont claimed the NSW Modified Sedan Championship after a torrid two-night affair where he narrowly defeated Mildura’s Dave Smith and Toowoomba’s Mick Shelford in the 30-lap final.