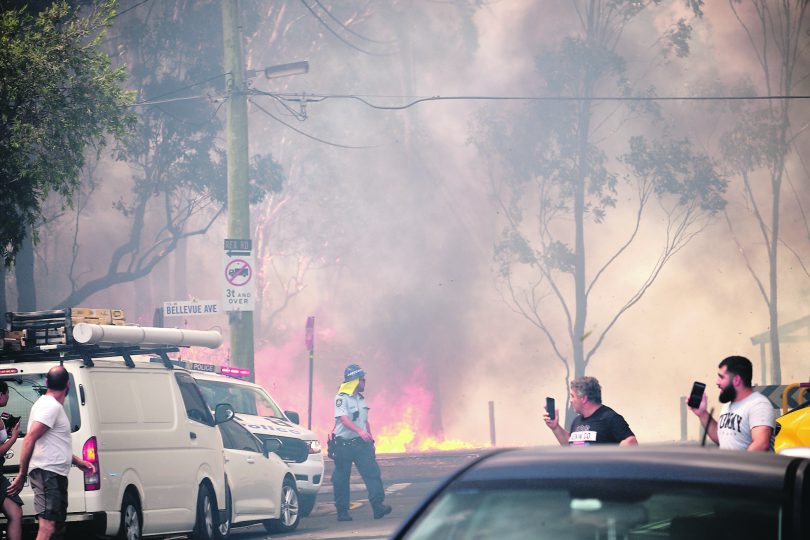 A FIERCE blaze which threatened homes neighbouring The Crest Reserve at Georges Hall on Saturday afternoon is believed to have been deliberately lit.
Emergency services were called to Bellevue Avenue shortly before 2.20pm after fire was spotted in the bushland reserve.
Sara El-saj, 22, was at home with her two sisters while their parents visited the Central Coast for the afternoon and says they couldn’t believe it when they first heard the fire engines arrive.
“Then we looked outside and saw flames in the trees, right across the road and we started freaking out. It was so frightening,” she said.
“We called mum and she didn’t believe us at first so we sent her a video and then she started freaking out.”
Ms El-saj said a few moments later a neighbour knocked on their door to say police were telling residents to evacuate.
“We couldn’t really even think, we just got ourselves and the pets out,” she said.
“We didn’t really have time to grab anything else.”
“Thankfully the neighbours were helping. They came and hosed down the front of the house for us. Then our cousins came and helped as well.”
A spokesperson for Fire and Rescue NSW (FRNSW) said seven crews, including one from the Rural Fire Service (RFS) worked to contain and extinguish the blaze by about 5pm.
However firefighters were forced to return twice more during the evening after strong and gusty winds reignited the blaze just before 7.45pm and again an hour later.
The day’s extreme heat made conditions difficult for firefighters with the temperature topping 46.7 degrees at 3pm, and later in the evening wind-gusts of up to 56km/h were also recorded at Bankstown Airport.
Police have appealed for assistance from the public as they investigate the fire and asked anyone who saw people acting suspiciously in the area to contact them.

JOHN Galea and his wife Enis left their chihuahua puppy Trevor at home when they went to have lunch with their son in Douglas Park: “We were really worried about the puppy and came home and tried to get back to the house but the police stopped us. The fire was really going. We were lucky to escape any damage and very glad that the fire brigade came and kept it away from us.”

SHANE Hinch used a garden hose to wet down the front of his property as flames topped the trees across the road and while he was forced to go inside three times by the ferocity of the heat, he refused to leave his home undefended: “It was pretty scary, but I didn’t want to go. Just over the fence, in the backyard, it caught fire from an ember so it was lucky I was here.”

AMAL El-saj was visiting the Central Coast with her husband and didn’t believe her daughters at first when they called to tell her about the fire: “I thought it was joke, then they sent me the video of the flames across the street and I about had a heart attack. It was such a shock. It came so close, if the wind blew just a little bit harder. I was just happy the kids and the pets were safe.”