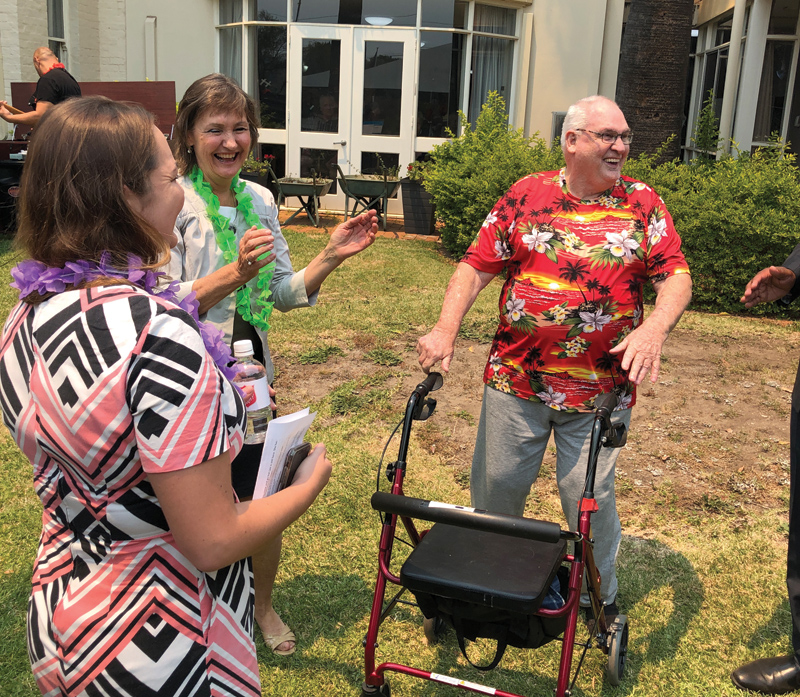 At the time, the property was named after Bramwell Booth who at the time was TSA’s General.

Attached to Booth House was a hostel, known as Booth Hostel for intellectually disabled women. These women were later moved to Winderadeen House at Surry Hills, to make way for the rebuilding of a new hostel for older persons.

The centre was renamed Maybanke Aged Care Centre, after one of Sydney’s most important reformers and feminists – Maybanke Susannah Anderson (1845-1927).

She had once lived at the grounds and ran a school from the property.

The celebration was an opportunity to acknowledge the achievements of Maybanke today as a 38-bed aged care facility.

“The centre not only continues to offer choice, lifestyle and a sense of belonging for all people as they age, it also creates a caring environment for those who call Maybanke their home,” Mr Anang added.

“The anniversary celebration was a wonderful day where we heard from staff and residents about their personal experiences at Maybanke. We also had some great African and Nepalese dance performances to reflect the diverse community at our centre.”

To find out more about Maybanke or other TSA services, call 1300 111 227 or visit agedcare.salvos.org.au.

Inner West Mayor Darcy Byrne, who proposed the new campaign, will reach out to councils across NSW to gauge their interest in collaborating with Inner West Council to better understand the local impacts of poverty and also write to mayors across the State seeking their support to undertake the same audit in their own communities.

“After 28 years of uninterrupted economic growth in our nation, the poverty rate has remained stubbornly high and economic inequality has increased,” Mayor Byrne said.

“Australia is among the wealthiest nations on earth and yet one in five children and one in seven adults are still living in poverty.”

Mayor Byrne said while gentrification had resulted in the Inner West becoming much more affluent, there was still a very significant proportion of our community living in poverty.

“And while poverty is a national challenge, the human impacts are felt in our local communities,” he said

“The local kids going to school hungry and the neighbours down the street who are being priced out by rent increases, are the local faces of poverty.

“Poverty is an issue that affects local communities across Australia.

“A majority of Australians want to do something about this, and we know that specific policy measures can address the causes of poverty. We want find new local solutions to disadvantage.”

The council will also seek cooperation from State and Federal governments to implement local solutions to any identified issues and work with stakeholders to develop a tool kit to allow local communities to identify and find a solution to poverty in their area.