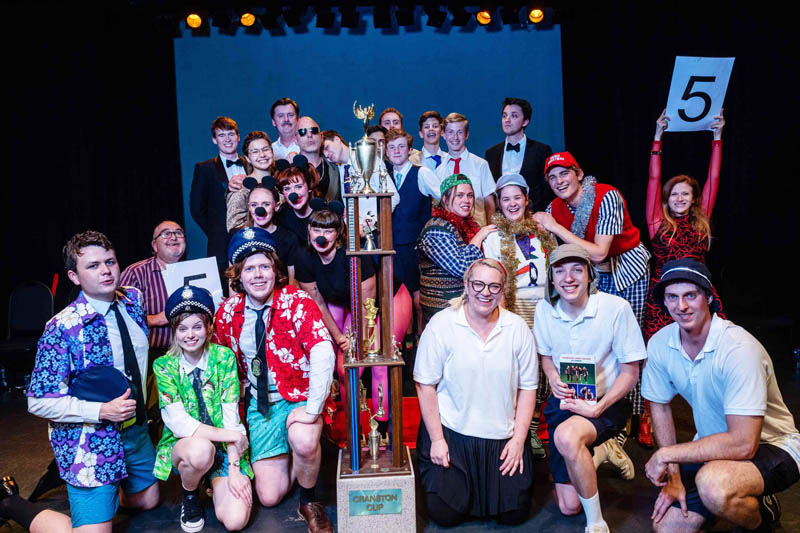 NEWINGTON College Stanmore provided one third of the finalists in this year’s impro comedy climax – the Theatresports Cranston Cup Grand Final – held at the Enmore Theatre on Sunday night in front of a huge, roaring crowd of fans.

The champion school team, “Year 6 Formal”, made up of Year 9 and 10 boys, were in their second final in two years and gave a fine performance, ultimately finishing fifth.
Their own school teachers and Theatresports coaches playing as the “James Hill High U/13B Reserves” were winners on the night, tying with “One Day Til Retirement” (Elliot Ulm and Tamara Smith of Stanmore and Reuben Ward of Lewisham) in an exciting and hilarious night of improvised fun.
Elliot was in the team that won last year and had the amusing task of presenting the world’s biggest, ugliest trophy to himself (and his teammates).
Other Inner West locals featuring included Isabella Pinson and Campbell Taylor of “We’re Cousins” (Croydon and Summer Hill respectively); Jon Williams and Kath Thomas of “The Bald & the Beautiful” (Summer Hill and Marrickville).
Born of humble beginnings in 1985, this wildly popular ‘cult’ impro-comedy show now attracts performers from around the nation and has helped launch the careers of well-known actors including Julia Zemiro, Shaun Micallef, Andrew Denton, Susie Youssef, Steen Raskopoulos, Andrew O’Keefe, Adam Spencer and Ed Kavalee.