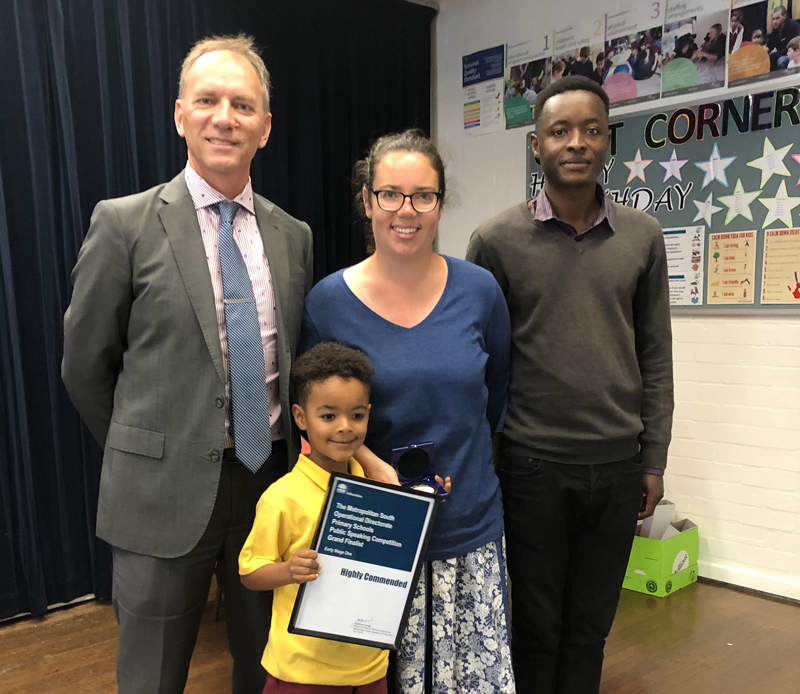 GOING up against some of the area’s best young orators, students from both Granville South and Guildford Public Schools put their best speech forward talking about trains, racism, play-doh and opinions.

Competing in the Metropolitan South Operational Directorate Primary Schools Public Speaking Competition, Guildford Public students Naureen Kalia from Year 2, Yusuf Unal from Year 4, and Shannell Djan from Year 5 all narrowly missed out on making the grand final.
However the school was represented by Kindergarten student Rafael Mokamba.
Guildford principal Chris Haberecht said the six-year-old received a ‘highly commended’ award delivering a speech on trains, a subject he is very passionate about, and an impromptu speech about play-doh.
“It was an extraordinary result, Metro South covers a huge area,” he said.
“He’s a very confident little boy.”
Rafael told Review he especially likes driverless trains which he’s travelled on both in Singapore and here in Sydney.
“They go very quick and if you miss one, you don’t have to wait too long,” he said.
“They come every four minutes.”
Granville South principal Karen Macphail also congratulated Reannah Hamdan who represented their school at the grand final, saying she was one of the final 15 students in Stage 3 out of 193 schools.
“We are extremely proud of Reannah’s achievements,” she said.
“Although she did not win, she spoke extremely well. Her speech was about racism and the impromptu speech was about opinions.”