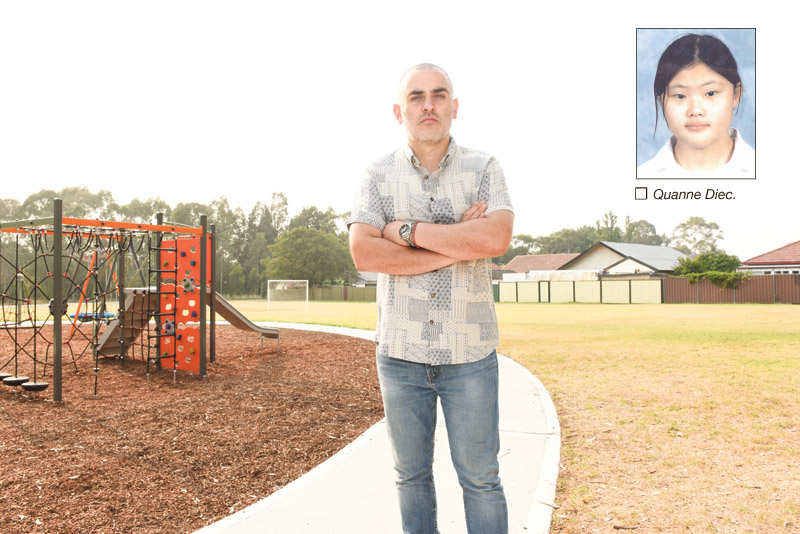 Cr Joe Rahme has called for the children’s playground in New Glasgow Park, to be named in the missing schoolgirl’s honour.

Discussions have begun between Cumberland Council and Quanne’s family after a call by Councillor Joe Rahme for the children’s playground in New Glasgow Park be named in her honour.
Growing up just one street away from the Diec family, Cr Rahme says she would have known the park very well.
A Year 11 student at the time she disappeared, Cr Rahme recalled regularly seeing her as they both walked the same way to their respective schools.
“Whenever the news comes up in the press, my mind goes back to that time,” he said.
“It really resonated with me as a young boy.
“Still to this day there has been no closure for the family.
“Our hearts go out to them.”
Reflecting on his memories of the day Quanne vanished, Cr Glenn Elmore also said it was “quite fitting” to dedicate the playground in her name.
Cr Eddy Sarkis also asked for consideration be given to including a plaque at the site outlining some of the details surrounding her disappearance.
The move comes after recent coverage of the jury trial and acquittal of Vinzent Tarantino, who in November 2016 confessed to abducting and murdering the 12-year-old in July 1998 before retracting his statement and pleading not guilty.
Her cousin, Christine Woo, said after the verdict that the worst part was not knowing where her body was.
“We wanted justice for Quanne and we haven’t got that,” she said.
“Someone out there knows where she is and to that person – you have shattered our family.’’