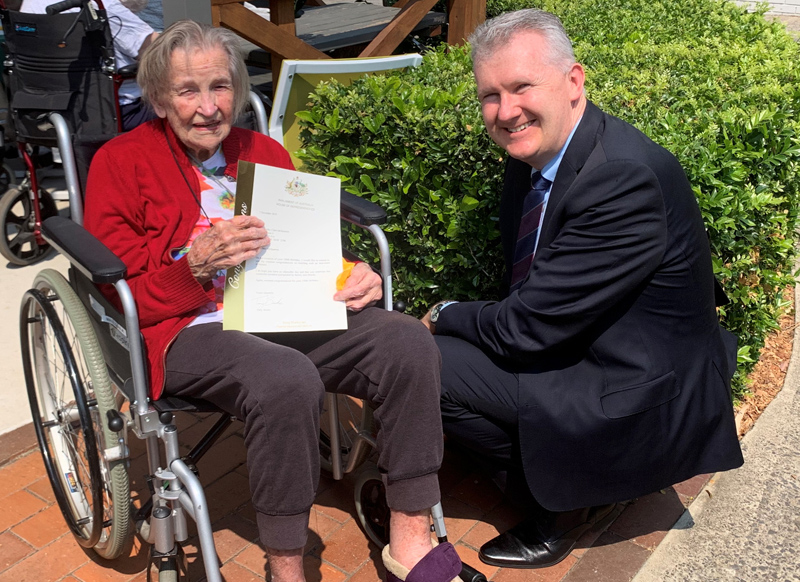 ONCE getting a ‘hole in one’ with her name up on the club honour board until the East Hills clubhouse burnt down, Roselands resident Dorothy McSparron reflected on the wonderful life she has had at an event to celebrate her 100th birthday last week (November 7).

She was congratulated on her milestone by Federal MP for Watson, Tony Burke, who said: “What a great Australian. Congratulations to Dorothy – 100 years of making us a better country.”
Born in Barraba, near Tamworth, in 1919, the fifth child of eight, to Launce and Jane Smith, Dorothy visited many country areas through her master baker father and got to see much of the world with her pilot husband.
Her family moved to Sydney in 1937, with Dorothy getting an office job with Anthony Hordens’ furniture factory at Redfern.
One of the Australian Women’s Flying Club’s earliest members, Dorothy could have gone on to be an Officer but had a family instead (Leonie, Geoffrey, Douglas and Denise with three grandchildren and three great grandchildren to follow) after marrying then RAAF Flying Instructor Jack in 1942, who later flew commercially all over the world.
After Jack retired, they ran a fluorescent lighting business in Rockdale for 20 years and moved to Beverly Hills in 1961 where Dorothy remained until 2012 before entering Leigh Place Aged Care in Roselands.
Also a former Royal Blind Society volunteer and member of Probus, Dorothy continues to enjoy daily events and all the special attention she deserves.