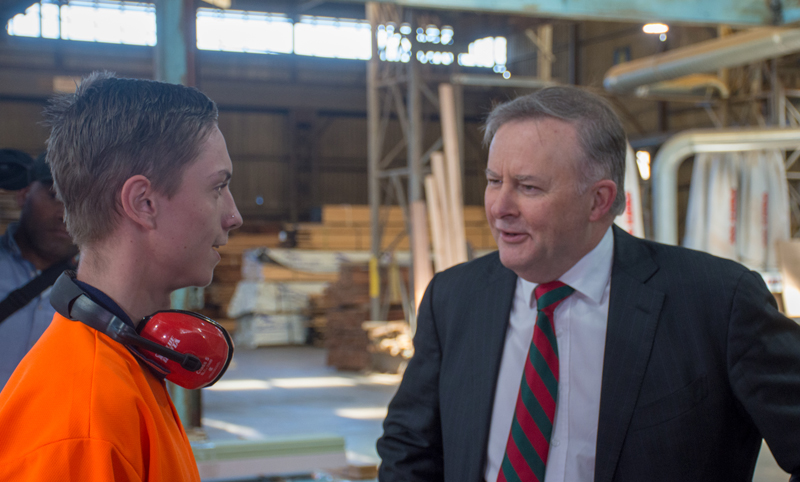 OFFERING support to local businesses over the lack of training for juniors, Grayndler MP and Federal Opposition Leader Anthony Albanese called in to family-run Danias Timber in Marrickville last week.

Mr Albanese was concerned about how TAFE cuts were impacting on local apprentices.
“When the Coalition took office, there were 1,418 people engaged in apprenticeships in my electorate of Grayndler,” Mr Albanese said.
“At the end of last year, there were only 746 because of the Coalition gutting TAFE and other skills and training providers.”
George Danias says that when he started the business in the 1980s, there were always at least three apprentices but now he’s down to one.
“It’s very hard to find any young people to work in the industry now; there used to be three TAFE colleges offering the training but now there is just one for all of Sydney,” he explained.

“So businesses like mine have to scratch to find juniors. My son found our apprentice Ben through the Timber and Building Materials Association (TABMA) which offers training for apprenticeships but they are one of the few left.”
Mr Albanese said: “There’s a crisis in skilled workers in Australia. Right around the country we have 150,000 less apprentices.
“But this Government has issued 500,000 temporary visas for overseas workers to come in and do jobs that we should be training Australians for.
“Businesses like Danias Timber are doing the right thing. They are a great example of the success of post-war Greek Australians, who have set up a small business; whose family work here across generations; who employ local people and have skilled up many apprentices over the years.”