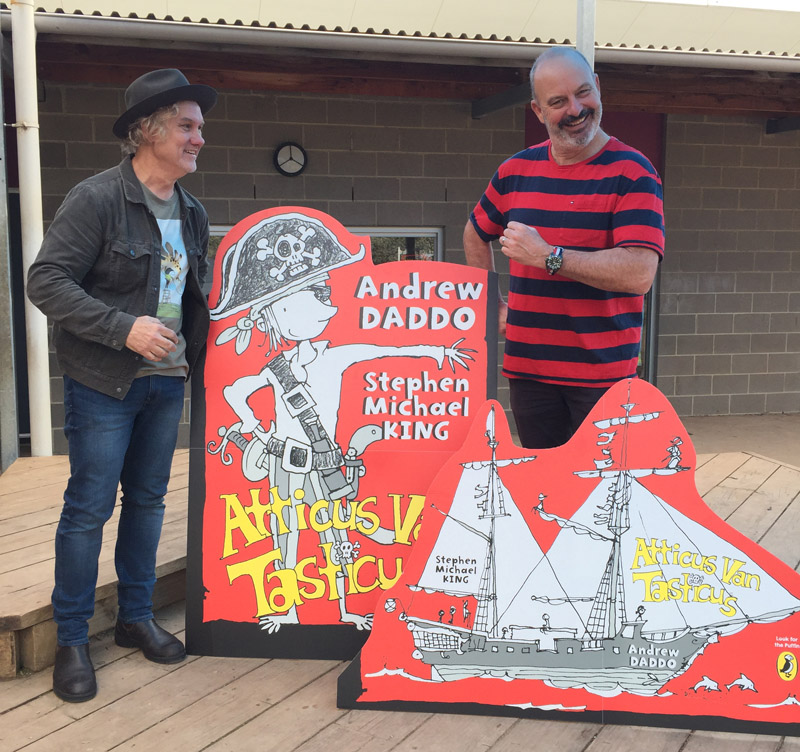 THE young and the young at heart are invited to Auburn Town Hall tomorrow, Wednesday, September 11, 4-5pm, to join children’s author Andrew Daddo and famed illustrator Stephen Michael King for a thrilling afternoon of pirate fun.

Discussing their new book, ‘Atticus Van Tasticus’, they will share their secret to successful book development and collaboration.
It’s 1750, when times were tough and teeth were rotten, ‘Atticus Van Tasticus’ is a zany romp for confident and reluctant readers alike.
“Evoking Roald Dahl mixed with the 13-Story Treehouse, story hero Atticus narrowly escapes a life down the coal mines – or worse, going to school – when he gets to choose the gift of a pirate ship from his Grandnan’s treasure pile,” Andrew said.
“It’s a choice that will change the course of history – well, OK, his story, at least. Atticus pulls together a rag-tag bunch misfits and the tough, brilliant crew sets out to wreak havoc – I mean – live a piratin’ life.
“With little else to his name, Atticus has a taste for adventure, beauty and danger – where any minute might be your last, and your next minute could be your best (…if only they could get off the dock).”
With this his 25th book, Andrew says he loves writing children’s book as he can let himself go.
“Even my 18-year-old daughter was enthused, saying ‘Dad, what did Atticus get up to today’,” he said.
“I was lucky to get Stephen as my illustrator as his work is beautiful and thoughtful; I sent him the first few chapters and he called me to say yes and ‘let’s be pirates’.”
To book for this event, with signed editions of the book available, call Auburn Library on 8757 9060.